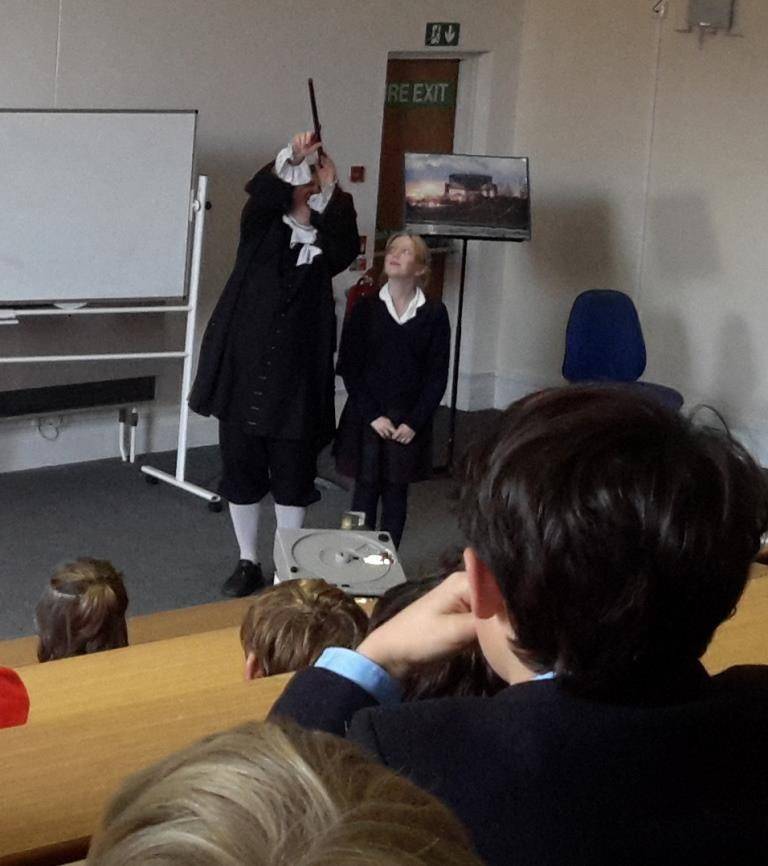 On Thursday the 12th November year 6 were lucky enough to go to King Edward’a School to hear a lecture about Sir Isaac Newton. At break time we all headed onto the bus and started our 5 minute journey to King Edward’s. When we arrived we piled out of the bus and headed to the lecture theater .

There was about 5 other schools there and all of a sudden a man with a brown wig  came rushing out the back door and running down the steps, he  and intoduced himself.  Immediately he had megripped,  he went staright from when he was born.  It was so interesting,  he was born the same year Gallieo died which was 1643 . When he went to school he was at the bottom of the class but  he was determined and by the end of prep school he was at the top. His mum wanted him to leave school at 13 to be a farmer but the Head persuaded her to let him stay.He went to the RoyalGrammer School. Gradually he worked his way to Cambridge. But in senoir school he found out about how to find the area of a lumpy shape but another man stole his ideas and claimed it first andnamed it calculus.

He told us about his role models and one of them was Gallieo Gallei. Gallieo improved hans Lippersheys telescope and invented a telescope that could zoom in 30 times closer but when you looked through it colours appeared, no one could work out where the colours came from but decades later Issac bought a glass triangler prism and realised all the colours in the rainbow made white light and so he put the glass prisim on a projecter and on the wall appeared a rainbow!

Then he went on to explain about how rainbows are formed with some scientific explaination then he asked for a volunteer,  I put my hand straight up and guess what I got picked. I raced down thesteps and he said that I would see the top of the rainbow at a 45 degree angle above me but when he looked at it,  he would see it at 45 degree angle above him so the rainbow would always be at my own height so its like my own personal rainbow he made me take a bow and I dashed up back to my seat.

After that he said how a man called Archimedes was sitting in his office when the General came and told him that there was a Roman invasion on the ships Archimedes said “Tell the soliders to go home and polish their shields” the General was shocked but he did it.Then he lined them all up on the shore and the sun reflected on the sheilds and focused on one part of the sail and it burnt all the other ships thought it was a waring so they sailed back!

Then he talked about gravity.He told us about the apple we all knew that, but then he went on to explain something I didn’t know.After the apple fell on his head he threw it away and he dog went and collected it then he threw again but he did it with more force and it held in the air for longer.If the apple went into space and it began to fall back down but the earth spins so it would tilt so it would miss it but gravity would pull it down so eventually return to earth but the moon spins at the right speed to keep in the air and that’s another thing Isaac newton discovered.

Then he told us the three laws of motion the first one is that a object will remain at rest untill a force is acted upon it.The second law is the greater amount of mass the more force is needed. Thelast law is that for every action there is a equal or opposite reaction. For this he used a volunteers it was Hettie and another person called Zach, he got them to sit on a chair and Zach had to pushHettie as hard as he could ,he did it and Hettie went flying forwards and Zach went flying backwards.

Then we headed out of the theatre and drove back to Barrow Hlls.

By Eddie and Eleanor