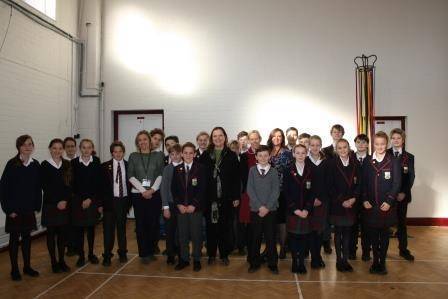 The STEM careers event was designed specifically for Year 8 children and was based on the WISE (Women in Science and Engineering) initiative which promotes an increase in the participation, contribution and success of women in science, technology, engineering and mathematics – a previously male dominated sector.

Titled ‘People Like Us’, the event provided the children with access to a panel of four speakers: Wendy Fischer, a Lab Manager for Intertek; Rachel Gray, former Sales Director of Cisco, world leader in IT; Dr Paola Coffey, a Doctor of Psychology; and Sally Whitehouse, a nurse.

Wendy Fischer spoke of how as a child (originally from Illinois), she had always dreamed of being an astronaut. This led to her choosing to study Industrial Engineering at university and she now works for Intertek, a testing and certification company. Rachel Gray highlighted the speed at which technology changes from the first Walkman in 1980, to the launch of the World Wide Web in 1990, YouTube in 2005, to the first Fitbit in 2011. When asked what was the most expensive thing she had ever sold Rachel answered, “probably one of Cisco’s immersive video conferencing systems worth tens of thousands of pounds.” Dr. Paola Coffey explained her field of psychology, the science of the mind, and her fascinating career to date in forensics and psychology in a hospital for serious offenders. Mrs Sally Whitehouse, formerly known as “Student Nurse Why” in her training days, explained how nursing is now very much a career choice for men and women and kept the children captivated with stories of her 30 year career during which she has, ‘never been bored, is always challenged and never stops learning’.

Mrs Blanche Wallace, who organised this wonderful event, commented, “With the country now being led by a female Prime Minister, we are regularly reminded of the amazing opportunities now open to women in the work place.  Never has there been such a strong push for women to opt for STEM related careers and we hope that today’s session has provided a snap shot of the significant benefits associated with working in these sectors, from the favourable remuneration to the incredible job satisfaction that awaits. As well as listening to our speakers, the children were able to find out more about the universities offering specific funding to help young women break into a STEM based career.”