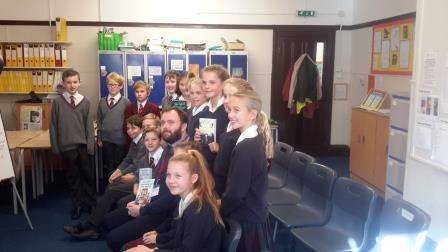 On 7th February, best-selling author Bruno Vincent came to Barrow Hills to present a creative workshop to discuss the art of storytelling and the inspiration for some of the creepy characters and atmospheric settings in his ‘’Tumblewater’ collection of children’s books.

His contemporary rewrites of Enid Blyton’s the Famous Five, part of the Ladybird parody series for grown ups – with titles such as ‘Five Go Gluten Free’ and ‘Five Go Parenting’, proved an instant hit, flying off booksellers shelves over Christmas. The Tumblewater books, published by Pan Macmillan, are his first for children. 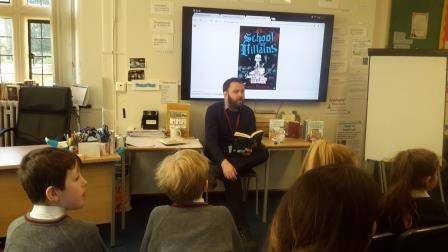 A bookseller and book editor before turning his hand to writing,  Bruno Vincent’s humour books for grown-ups are co-authored with Jon Butler and have gone on to become national best sellers translated into seven languages. Children from Years 5 – 8, delved into ‘Grisly Tales from Tumblewater’, and ‘School for Villains’. Both books feature the popular orphan-turned-storyteller Daniel Dorey who, in the telling of the tale, unexpectedly becomes part of the story itself. 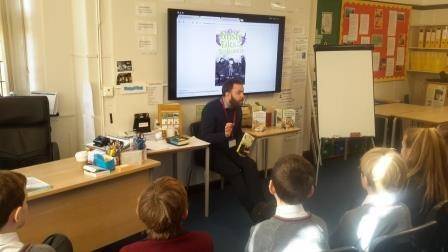 His first book for children, ‘Grisly Tales from Tumblewater’, described by reviewers as ‘richly descriptive’ and ‘a deliciously dark novel’, was previously nominated for Waterstones 2010 Children’s Book Awards. It features a collection of creepy atmospheric tales set in the damp and dismal world of Tumblewater, a city where it perpetually rains, full of creepy characters, creaky houses and a foggy graveyard on every street corner – a welcoming place only if you are an undertaker or umbrella salesman. The book’s back cover promises woefully sticky endings and the last page finishes on a cliff-hanger leaving young readers eager to know what happens next to protagonist Daniel Dorey.   ‘School for Villains’ features a strange school full of shady characters where lessons include forgery, lock-picking and still life painting (with a twist).

During his visit, the author fired the children’s imaginations and showed them how to successfully put a plot together whilst also encouraging confidence in their work.