Barrow Hills School opens its doors to the public 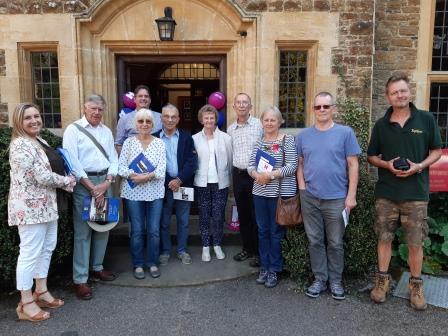 Barrow Hills threw open its doors to the public for guided tours of the historic building and grounds on Saturday 14th September, as the School participated (for the fifth consecutive year) in the national Heritage Open Days initiative, England’s biggest festival of history and culture. Celebrating 25 years, the Heritage Open Days are designed to enable members of the public access to sites of unique interest, bringing local history and heritage to life.

Visitors were invited to participate in a guided tour by Mr Crisell, Deputy Head and former pupil, who took great pride in explaining the school’s origins and its rich history, while showcasing one of Surrey’s best kept secrets. Set in a 33-acre estate, visitors were able to take in the stunning architecture within the principal school building, Great Roke (Grade II listed), which was built as a substantial country house in 1909 by partner architects, Buckland and Haywood, one of the leading Arts and Crafts architects firms of the Birmingham movement. Mrs Goekoop, Head of Learning Support and Extension, provided further details regarding the building’s rich history, explaining how the Tudor style mansion – originally designed for lavish entertaining complete with its own minstrels’ gallery – has been hailed as ‘the most ambitious house undertaken by the partners and is arguably one of the finest large houses produced by the Birmingham movement’ – costing a grand total of £25,000!

During its 110-year history, the house has undergone many transformations, since its inception as a home for The Dixon Family, including a period where it was placed at the disposal of the British Red Cross for use as an Auxiliary Home Hospital during the First World War. The house was eventually taken on by the Josephite Fathers as an all boys’ boarding preparatory school, which later evolved into the current co-educational day school, now run by the school’s parent foundation – Bridewell Royal Hospital.

A popular element of the tour, was the viewing of some of the original handiwork by the esteemed landscape garden designer, Gertrude Jekyll, who was commissioned by Mrs Dixon in 1910 – although the gardens have been substantially altered in subsequent years.

Commenting on the tour, Mr Crisell said, “The Heritage Open Days at Barrow Hills provide a wonderful opportunity for visitors to witness at first hand our striking school building and stunning gardens. It is an honour to share the School’s fascinating history and to unveil one of Surrey’s hidden gems.”